I was going to start out by quoting the old fisherman’s fallback “you should have been here last week”, however with as good as last week was, the new arrivals for the beginning of the seasons 2nd week are starting out very well. Spring weather doesn’t know what it wants to do…3 weeks ago we were sweating in tee shirts, 2 weeks ago we had snow on the ground, and now are in a pattern of off and on drizzle (the stuff us walleye fishermen look for). Although what ever the weather each day the fish have cooperated at some time. Plenty of those good ol’ 15-16 inch walleye that hit my fry pan and many others soon after the starting gun went off. Tho the water is up from last year it has been a dry spring and fish are ahead of schedule. With the action of the “eater” walleye we expect this time of year, the big ones are already being caught with much more consistence than is normally for end of May (a couple weeks anyway ahead of schedule). The numbers of slot walleye (18-23 inches) have met expectations, but the surprise is upper 20 inchers that usually step up after spawn mid June are being caught with some consistency with 1 last week over 30…unusual for this early, but no complaints!

Second week guests mostly arrived yesterday and today and with just starting out reports from the dock are plenty of fish, several northern pike just today in the mid 30’s, and a couple more walleye in the upper 20’s. No serious smallmouth fishermen yet but a few latched onto some accidental trophies. 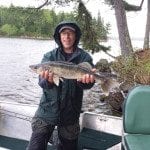 So far for now you should have been here last week!…or this week!…but we’ll keep you posted. 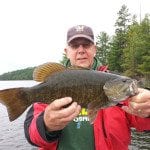